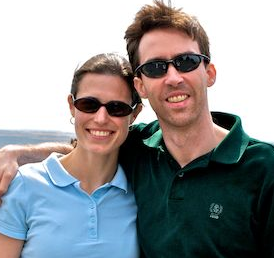 Michael and Anne Bello are nuts about squash. They play squash, they met on a squash court, and together, they run collegesquashassociation.com, an amazing site dedicated to playing squash at the college level in the United States.

“I’ve been playing squash since I was about 12,” says Michael. “I started playing in prep school (Williston Northampton). I loved the sport from day one. I played recreationally in college and continued on afterwards.”

On WordPress since 2009, collegesquashassociation.com publishes five times a week. In covering the college squash scene, the site offers photos, videos of squash matches, rankings, match schedules and results, as well as information on getting involved in squash at the college level. Michael says each match teaches him something new.

“Every time I cover a squash match, I learn something new about the game,” says Michael. “It could be the movement of a certain player or the tactic employed during the match. I’ve actually become a better player through reporting on matches for the College Squash Association.”

For Michael and Anne, WordPress makes it easy to publish and VaultPress offers peace of mind, knowing that the content that they’ve worked so hard to create is safe at all times.

“I created my first WordPress site to organize Western Mass squash players back in 2005,” says Michael. “The flexibility and the ease of publishing articles on WordPress is ideal. I was struggling with an easy way to back up the site’s files. I heard about VaultPress on the WordPress.org forums and through a few blogs and I instantly signed up for a “Golden Ticket.” When VaultPress finally arrived in June of 2010, I was thrilled. With the amount of articles, images, and custom themes we have on the site, VaultPress is perfect. I’ve had a few times when I’ve needed to recover certain files, and it was extremely easy with VaultPress. Plus, having Automattic perform critical patches is very reassuring.”

The Bellos’ collegesquashassociation.com is one member of the growing VaultPress community. Learn more about how VaultPress can protect your content, theme, plugin, and site settings and customizations. Contact us with questions, or you could make our day, and sign up to protect your site.